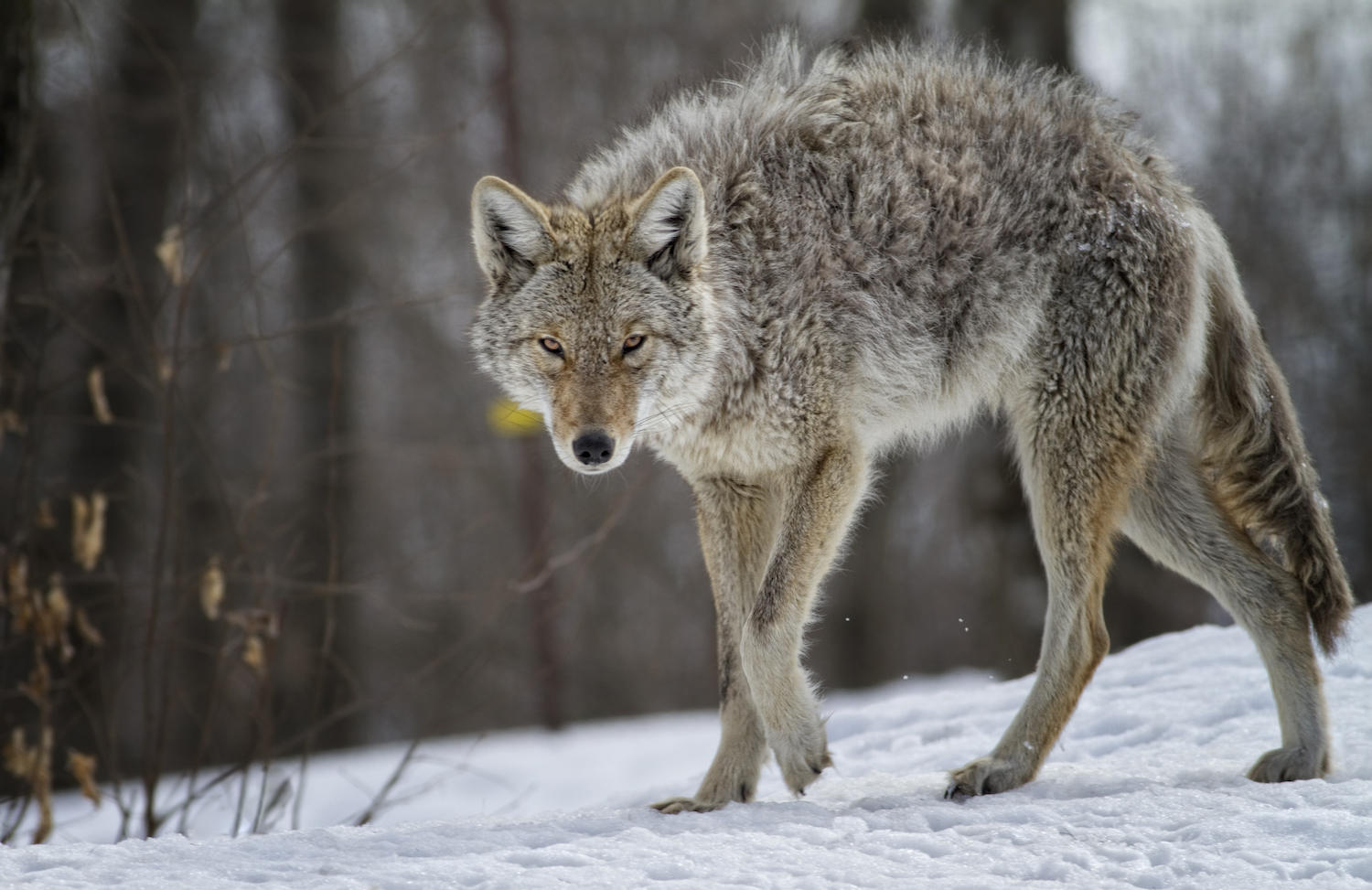 Returning from an awards ceremony at Rideau Hall in the dark of the evening of November 29, Bethany and Sarah Simison drove out of the back gate at Princess and Lisgar and in the headlights saw a large wolf-like canid at the edge of Pine Hill. Sarah is familiar with Coyotes around Moose Jaw where she lives and at once realized this animal was larger than Saskatchewan Coyotes. That fits; eastern Coyotes are larger than prairie ones, and from studies by the NCC in Gatineau Park we know that there are a number of Coyote/eastern wolf hybrids in our area. These hybrids are substantially larger than eastern Coyotes. The eastern wolf population appears to be centered in Algonquin Park and is genetically distinct from the larger Grey Wolf of the north country.

I’ve been expecting Coyotes or coywolves to penetrate the Village since Brian Dickson reported sightings just east of us several years ago, in the open scrub land south of the Rockcliffe airfield. So, with the familiar Red Fox, we now have a second wild canid in the Rockcliffe fauna. But Coyotes are predators of foxes, so their presence could lead to fewer fox sightings. Coyotes have now adapted to making a living in areas as urban as downtown Chicago and Toronto and in suburbs throughout eastern North America.

Since the 1970s I’ve maintained nesting boxes for ducks around McKay Lake because, while having many of the qualities of a woodland lake, there were few natural cavities in the surrounding trees. But I am now taking the boxes down. Initially, one or a few boxes were used each spring, by either Wood Ducks or Hooded Mergansers. As the summer advanced, one could see the resultant broods of ducklings. Always the numbers of ducklings were reduced by predation during the summer, but some survived and flew. The same was true for Mallards that don’t use nest boxes. But in recent years, the few broods that have appeared with their mothers in the spring have ended with zero flying young. In this situation, it doesn’t improve duck numbers to entice them to nest at a site where their young do not survive.

The likely duckling predators are Ring-billed Gulls (when the ducklings are really small), Great Blue Herons, Black-crowned Night Herons and Snapping Turtles. The gulls, Great Blues and the turtles have all been present during this whole period. The night herons are more recent arrivals.

The other nesting boxes I’ve installed for years around the lake are for Tree Swallows. In a natural setting, they too depend on holes in trees. They take readily to boxes. Unlike duck numbers that have long been healthy, Tree Swallow populations have crashed in much of Eastern North America, as have some other bird species that feed exclusively on insects taken in flight. I am now concentrating on putting up more boxes for swallows, providing nesting opportunities for a species in trouble. The use of these boxes has recently increased: Swallow broods successfully fledged from two boxes each year from 2012 to 2015, three in 2016, and four last summer.